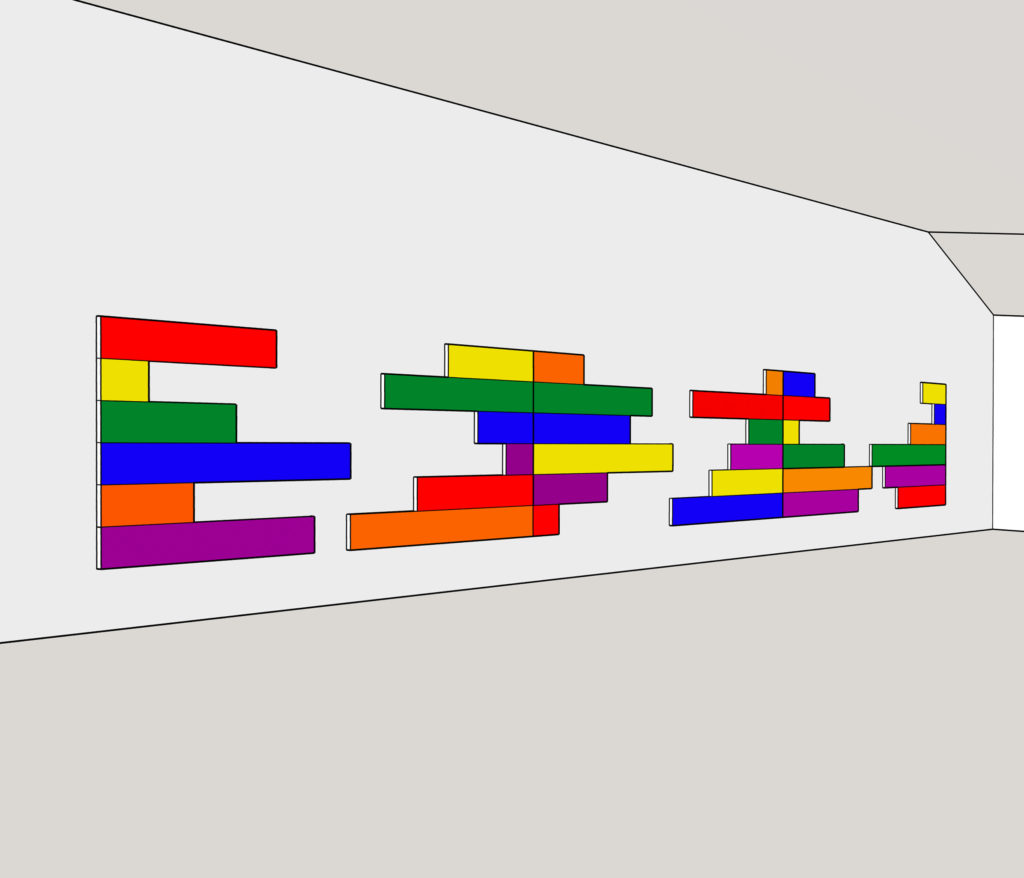 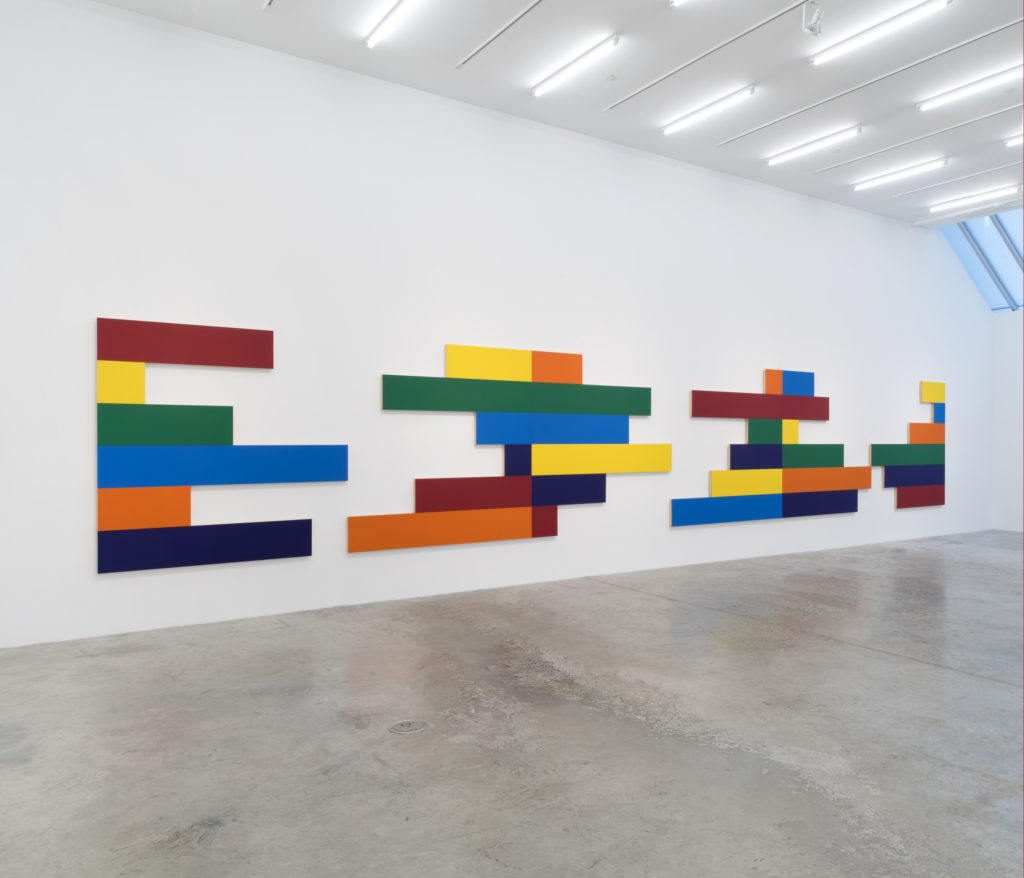 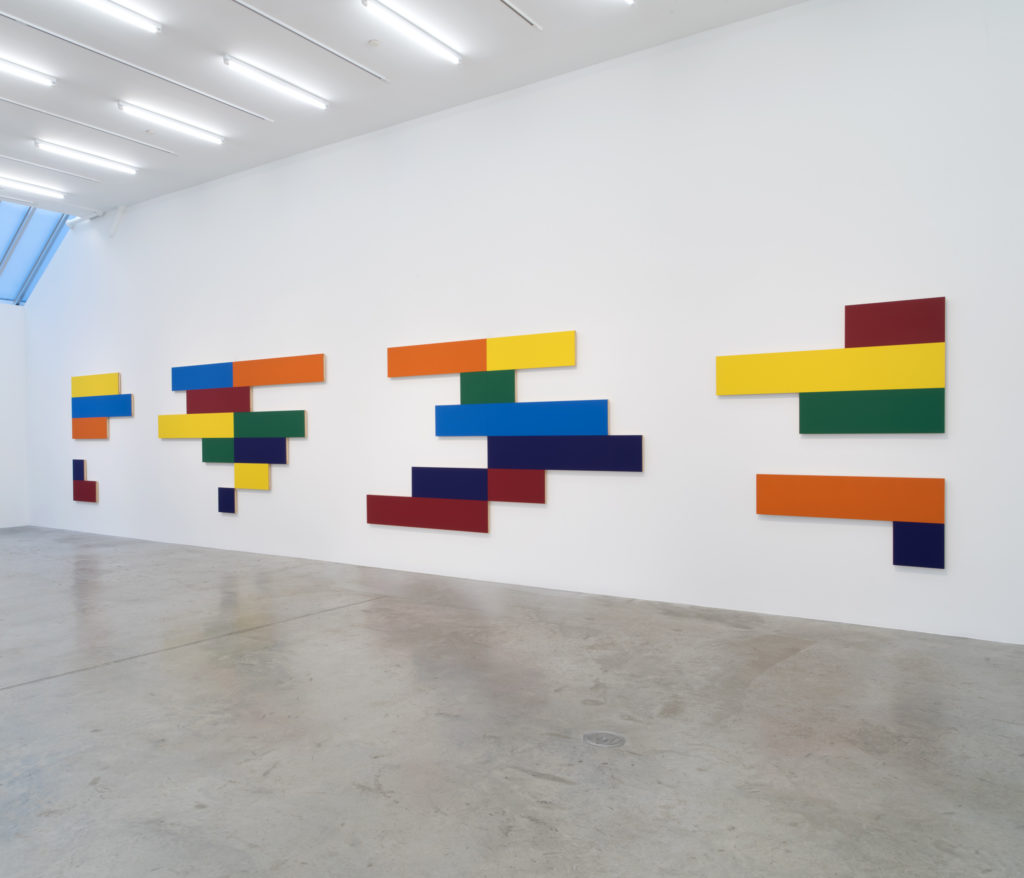 This simple relation between two shapes and the space they produce between them quickly turned into a painting in multiple parts on two walls that face each other. Additional parts produce additional irregular edges and hence additional negative spaces.

The relation between the subject of a representational painting and the painting’s negative space is that of complements. Together they occupy the material extent of the painting. In 6 × 6 × 6 × 2 the relation between the irregular edges of the shapes and the negative spaces they produce beyond their confines is also that of complements. The work extends my interest in working with complementary relations but in a new register, that of shape.

A ready means for producing a chance result, which by definition is noncompositional, is a die: six faces, each with a different number, one through six.

I rolled a die to determine the width of the bottommost panel of the stack at the left-hand end of the left-hand wall. The die came up five, so the panel was five feet wide. After the die told me the width of the panel, I rolled it again to determine its color. One was red, two was orange, and so on. I rolled a six, so the color of the panel was violet. And so, working upward, I proceeded panel by panel to make the first stack. If the die gave a width that was already in the stack, I rolled it again until it gave a width not already in the stack, and the same went for the color. The same procedure made the rest of the stacks on that wall. Each stack is six feet high and at its widest is six feet wide, occupying a square without filling it. In the first stack the left edge is flush and the right edge is irregular. In the second stack this relation is reversed, so in this one respect the first and second stacks are symmetrical while the lengths of the panels in the two stacks are not. It was a stroke of luck that the wall of the gallery was wide enough to comfortably contain two additional pairs of stacks, symmetrical in the same way as this first pair, giving a total of six stacks.

6 × 6 × 6 × 2 asks the viewer to visualize the stacks on the right-hand wall fitting with the stacks on the left-hand wall or vice versa. The result of this act of imaginary translation would be a rectangular painting made of many contiguous panels. Like the two arrays on either wall, this imaginary painting would be six feet high and thirty-six feet long.

The colors in 6 × 6 × 6 × 2 come from the third edition of The Theory and Practice of Color by Bonnie E. Snow and Hugo B. Froehlich, published by The Prang Company, New York, in 1920. This book in its several editions is one of my favorite books.

Because the work is the result of a chance procedure, each of these other possible instances is equally the work. The work as realized is what repeated rolls of a die happened to make that one time. I didn’t do several complete instances and pick the one I liked best. Because all possible instances are the result of chance, they are all the same work, and as such they are all equal. In my relation to them there is no occasion for my taste.

I had earlier thought it would be fun to make a book showing all the possible instances of the work. Each would be shown in a two-page spread. The pages would be wide in relation to their height. I knew it would be a thick book, but I didn’t realize how thick. The part of the book with the images would have 1,555,200 leaves. Supposing the paper were 100-pound coated paper, a sheet of which is 0.005 inches thick, the book would be 648 feet thick, plus a few pages at the beginning for a title page, etc., and a few at the end plus the covers. If the work were divided into volumes each six inches thick (plus the covers), there would be 1,296.

An issue in the book would be the order of the instances. A systematic order could persuade the viewer who looks at several successive instances that the book does probably include all possible permutations. But which systematic order? If it were to start as I did with the bottom panel of the left-hand stack on the left-hand wall, there would be many ways of proceeding systematically from there, as there would be starting from anywhere else, and I don’t know how to calculate them. A random order would avoid dealing with that question. The viewer would have to take it on faith that the book included each of the 3,110,400 instances.

If there isn’t a book, there could be an online version. Let’s duck the question of order and say that every visitor is shown a random instance. A counter could show the running total of all views. The visitor could do searches, so for each instance there could be two counters, one showing the number of views that are random, the other showing the number of views that are the result of a search. Instances I would search for are those in which the panels in the six stacks decrease in width from bottom to top or from top to bottom. In either instance the colors would be in order—red, orange, yellow, green, blue, violet—from bottom to top or top to bottom. These four instances wouldn’t look random, but they’re just as possible as each of the 3,110,396 others.